The North vs. The South – a debate about which is better has raged on in all elements of society, from housing, employment, education, cost of living and culture. Each “side” believes they are right, that their territory has the upper hand and the other side doesn’t have clue what they are missing OR talking about. It is a debate that will never have a conclusive winner, no matter what either side will have you believe.

Driving along this morning, listening to Radio 1 (even though I’m technically way out of their target age audience) made me laugh when the old North/South divide came up in conversation. The DJ, with his broad Mancunian accent was covering for the regular guy on a Sunday and had something he needed to get off his chest. It’s something that as a born and bred Southerner, I will never understand the appeal, but Derbyshire (north) bred Husband feels passionately about: gravy on chips. In the London chippy, said DJ asked for gravy on his chips, only to be met with a blank look and request to repeat himself. There was zero gravy to be had, but there was tartare sauce, offered the proprietor. Mr DJ was not given to such things and asked for red sauce, only to have to repeat himself and then translate “red sauce, you know, ketchup?”. 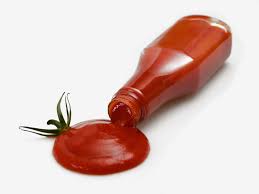 Ketchup to the Southerners

Now, I feel for the guy, I really do. Being a stranger in a strange town isn’t easy, I’ve been there. When I first moved to Yorkshire, almost 8 years ago I was mightily confused when I was asked at my local chippy whether I wanted gravy and even more so when they asked if I wanted scraps. Truly, I thought, did they really mean I wanted the leftovers from someone else’s plate? Thankfully, scraps are not the leftovers from a previous customer; they are the amazingly crispy bits of batter that have broken off in the fryer from the fish and the sausages (which I never knew could be battered and eaten). They are the best bits of the whole chippy affair and what’s more, they are free!

Fish on the left, scraps on the right. Champion

We never had scraps in the South and never gravy on chips. It was salt, vinegar and ketchup. Mayo if you’re in a pub and having proper food. But gravy? No. Gravy was for roast dinners, sausage and mash and the sauce in the pie under the pastry. And please don’t get me started on curry sauce – which is luminous and sort of reminds me of a gastrointestinal complaint. It doesn’t stop there – the whole “weird food combinations” continue until tea time when it’s not unusual to add a slice of cheese (Wensleydale) to a piece of fruit cake and then eat the two together. I’m not a fan of fruit cake so it’s an unlikely one for me to eat but I may have made a horrified face when a colleague ate said combination during afternoon tea one day. I was duly schooled in the ways of cheese-with-cake and sent on my way.

When I go back to see my parents, I get asked where I’m from. Not by my parents, but by people in shops if I happen to talk to them. When I’m home (Yorkshire) I often get called posh, and occasionally asked where I’m from. I’m no longer Southern enough in the South but I’m most definitely not Northern despite not saying “barth”, “graass”, “glaass” and “parth” – I say it the proper way, with short “a” sounds. Thanks Dad, I’m glad your lapsed Midland’s accent has rubbed off on my enough to ensure I get minimal amounts of piss taking in everyday conversations.

So Mr DJ, Southerners are weird for not understanding about gravy on chips, that ketchup is not called red sauce and that we talk funny. I’ll educate Southern friends and family about the merits of scraps and that cheese with cake is quite tasty. I love the North, my adopted home of choice. In the mean time, curry sauce? Just no. Stop it. Ditto mushy peas.

Fish and chips – ruined by curry sauce and mushy peas