Fair warning – this will be a LONG post. Bring a comfy chair.

I’ve been sitting at my desk for about 20 minutes, futzing about on Facebook, Spotify and Instagram. I’ve just eaten my stroopwafel in the correct manner (balanced on the rim of my cup, letting the heat from my tea warm the caramel into a more yielding, chewy consistency – this is progress. I’m impatient, preferring instant gratification than a wait for something promising…and so I tend to dunk most biscuits/cookies into said beverage). My husband asked what I was going to write about; my instant answer was “Yarndale” (more about that in a bit) but then, as with most things, I started to think properly about what I wanted to write about. Not being a naturally talented writer, this happens fairly regularly. I know people who can just pick up a pen or open the laptop and just write, the words flowing from fingers to screen/page like water. My style is most definitely a very slow trickle, more like when the Zambezi floods slowly into the Okavango delta. A slow tiny trickle.

So, Yarndale. When I first mentioned it to people, some thought it was an actual place in Yorkshire, others thought I was just saying random words and then there were those who shared my desire to visit and peruse and purchase. For the uninitiated, Yarndale is a 2 day exhibition of all things yarn related. Crochet, knitting, weaving, dyeing, spinning – if it looks like yarn or can be made into yarn, Yarndale is the place to show it. Hosted in North Yorkshire at the Auction Mart building in Skipton, over 300 exhibitors come together to showcase their products, hold workshops and allow people from all over the world to find inspiration, yarn and accessories to aid in their crafty and handmade creations. I say people from all over the world, yesterday there was a lady who had flown over from Argentina to attend – dedicated is all I can say. In addition to the yarn, a couple of Angora rabbits, some alpaca and sheep were also in attendance – just in case you weren’t sure what animal your yarn was from.

Having never been to Yarndale but being a recent convert to the world of crochet, I really wanted to have look at what it was all about. And here is where I decide to tell you what I really wanted to write about. Going to Yarndale wasn’t a mountain moving feat, but up until a few weeks ago, was something that I didn’t think I would be able to do. I’m not on crutches or in a wheelchair. I’m not bound to a job that means my weekend was written off and there was no pre-arranged plan that clashed with the event. The only thing holding me back was me. I didn’t think that I deserved to go. I didn’t think anyone would want to come with me and I didn’t think I should ask to go. These things may sound like a lame excuse or a navel gazing moment but to me, they were the beliefs that I’d held onto for a very long time. They permeated everything I thought about, an overwhelming feeling that I wasn’t worth it and why would anyone else think that I was. This negative self belief pattern has been built up over 20 years and it has taken a shed load of talking to get any cracks to appear.

I’ve been on anti-depressant medication now for 3 years. My husband has never known me unmedicated. I’ve had good periods where the medication is doing its job and then I’ve had relapses of extremely poor mental health where I’ve considered suicide as my only option. I’ve sobbed until I’ve retched. I’ve been struck dumb by my mental grief that is only apparent to myself and is contained only in my head. I have been a puppet, portraying one version to the world with my true feelings only showing when the front door has closed and I can drop the stage smile. My libido has risen and fallen quicker than the mercury in a barometer during a storm. I’ve hated my body and desires, shutting out all efforts of others to engage me in meaningful conversation while they try to help me. I’ve admitted things that I thought I had shut out and after all that, I still knew I could be better. I could be mentally well again. Finally, I’ve turned a corner.

In the last 4 weeks, I’ve had my first 2 sessions with a cognitive psychotherapist where I get an hour to talk to him about why I feel the way I do. Before you roll your eyes and stick your fingers down your throats, hear me out. When psychotherapy was suggested, I wasn’t sure. Really and truly I didn’t believe it would be worth it and that I was too broken to be helped in any way other than with time-honoured drugs. But she insisted, this rather nice mental health assessor at the doctors. It would be a wait, as mental health services are over stretched, under funded and over subscribed but if I could hang on 12 weeks, I would be assigned a therapist for up to 2 years for an hour each time. 12 weeks? Hell I’ve waited 20 years, what was another 3 months? Those 12 weeks passed fairly quickly, time speeding up the older I get. I dutifully filled in the questionnaire sent to me by the mental health team and posted it back – the basis of my referral. I was honest. I had to be if I was going to get anything from this opportunity handed to me. I told him about how I viewed myself in relation to the world, that I didn’t think I was worth anything and that I was waiting for everyone to give up on me and walk away. I told him about my greatly reduced libido, my marriage, my employment and my hopes for the future. I told him about the sexual assault that occurred just before I met Husband. There was nothing left out. Have you ever tried to be honest, really honest with someone? Not easy is it?

While this was being processed, I started talking to Husband more. I had to really. If ever I needed to say sorry it was to him. For shutting him out, closing down on him and keeping him firmly at arm’s length. Slowly though I remembered that I could talk to him. He listened, he helped, he counselled and he made tea. Mostly though he listened to my ramblings and stilted sentences. For someone who can talk utter rubbish to lots of people, I’m hideously bad at talking to the man I married. I told Husband that as a child I would get my dad to come into my bedroom to remove a “spider” so I could eventually tell him I’d lost all my PE kit at school. I couldn’t just come out and say “Dad, really sorry but I’ve screwed up and lost all my kit”. No – I needed a way to shoehorn it into the conversation about 8 weeks after the event. So fearful was I of being told off, of being a failure that I went 8 weeks using kit from the lost and found box before admitting my error. This pattern has stayed with me for 20 years and I’ve started the break up process.

TRIGGER WARNING – The real hinge point though was admitting I had been a victim of sexual assault by someone in a position of power. The summer of 2012 I was made redundant and went on the job hunt. I found one, and the man than assaulted me became my boss. I was weak and vulnerable – being employed is a big part of my personality. This man saw my vulnerability, picked up on it and raped me.  It has taken me until now to be able to say what happened and how this has impacted how I feel about sex and intimacy. Being able to talk about it, about how it made me feel and how sex made me feel has given me back the control I thought was lost. I talk to my therapist about it, to my Husband and while I have a way to go, I know a couple of truths that I had ignored: it is not my fault, it will never be my fault and I will not let this tarnish the rest of my life. Rape is about control and power and I refuse to allow anymore control be taken from me. I haven’t decided whether I want to make a formal record with the police. Academically, I know it isn’t worth it – there is no physical evidence and it happened too long ago to have any sort of proof. The likelihood of him being arrested is slim and would be my word against his. There is almost zero chance of prosecution. What is important is I’m talking about it. Progress.

Credit: refe99.com/One step at a time

So, why then this weekend of feels all over the place? It just happened. I got a distinction for the last psychology module and exam (can I get a high 5?), I had a really lovely session with my very nice therapist (I didn’t cry once, he said I’m making progress and I’m starting to test out new ways of behaving and thinking), I went to Yarndale with Husband and a very dear friend and her mum, I tried out new skills at Yarndale including lace making and added new confidence to myself. I like to see confidence as a physical thing, much like a piece of fabric, or cheese. In case I didn’t think I had enough to do while I hold a full-time job, study for the Access Course in the evenings, continue to make new things with my crochet hook, cook and make bread, I’ve also signed up for a 6 week pottery class starting on 5th October. Why? Simple really – I saw a beautiful selection of pottery yarn bowls at Yarndale, each decorated and finished to an incredible standard. I really wanted a yarn bowl – currently I commandeer the mixing bowl if I want to crochet outside or I have a massive ball of yarn. Husband suggested I learn to make one instead. With the wonders of modern technology, I googled evening pottery classes while having a pee (multitasking and striking while the iron is hot etc) and 10 short minutes later, I’d called Fired Art Designs and booked myself onto the next course. Pottery here I come. I also have to learn how to knit – Husband bought me some beautiful bright green baby alpaca yarn that will be made into a reversible cowl. 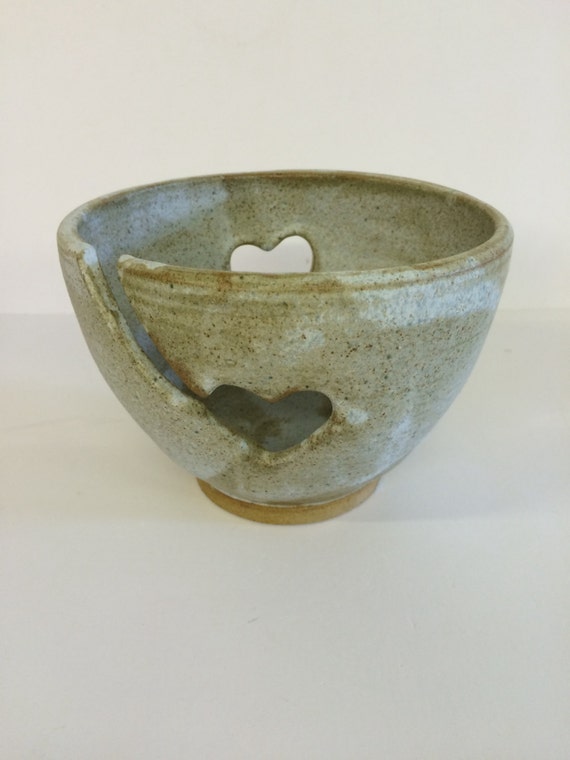 Credit – Etsy/Wendy Fowler Pottery/This is what I want to make!

3 responses to “Happiness becomes me”

Leave a Reply to The Clothesline Cancel reply