So, here we are again. December is well and truly in full swing and of course it has been Christmas since the middle of October. Well, that’s what it feels like and I’m pretty sure the Christmas kick off starts earlier each year. This could just be me getting older and therefor grumpier (I’m training to be a grumpy old woman when it’s finally the right age to be) or maybe in my job they start planning for the season well in advance so things are bought, booked and brought in on time but somehow, Christmas does seem to appear earlier each year. As long as it sticks to the latter quarter of the year I think we’ll be ok, but if it starts to creep into the summer months, we know we have a problem. 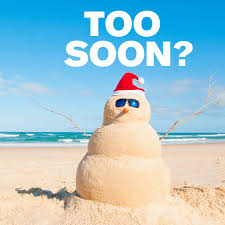 I’m not a bah humbug as I once was. Having spent a good few years with someone who detests Christmas and all it goes with including a tree, I’m loving the little things again, especially the tree. Ours this year is rather excitable – branches looking like waving arms – as one person said, it has jazz hands. A holly wreath on the door is another little touch that I’ve reclaimed. Admittedly it tends to serve a double purpose of spiking anyone that gets too close to the doors as well as being a festive sign but what can you do?

This year was the earliest the tree has ever gone up in my memory. As a child, the tree acquiring was a thing of legend. Dad would decide that we could only get the tree as close to Christmas day as possible, so as to keep its needles for as long as possible. It would be a whole afternoon of caressing and stroking and talking to the trees before we could pick one that was the best one possible. Invariably it needed a serious chop back of branches and of trunk so it would fit in the hallowed tree spot in our house. When my brothers were small and still acquiesced to an afternoon nap, the tree would be hoisted into the ancient tree holder and wrestled into the space. The lights would be untangled and tested (god knows how they survived the tangling) and then the decorations would take place. My sister and I had the “throw it all on” approach but mum had a much better eye for what was needed where. So, patiently and sometimes not so, she would let us put it all on and then when we got bored/hungry/thirsty, we would melt away and mum would finish off the job so it looked good and not like Christmas threw up on the poor tree.

This is not what a tree should be subjected to

We had another tradition of making crepe paper garlands. Every year, dad, my sister and I would sit down with yards of red and green crepe paper and the scissors and would snip hundreds of cuts into the paper. Eventually we would unravel them, place a red on a green, twist and dad would scale a ladder and pin to the corners of the ceiling until it was deemed festive enough. Then the foil 3D garlands would come out and be pinned up (how the ceiling didn’t crumble with the pins is a miracle too) and eventually the card holders would go up and the cards wedged into place only to be brought down the moment anyone passed too close to them. All this would then be shown to the boys after they woke up – the magic that Christmas can only be to someone so small. One year however, the magic was misplaced. Small boy awoke from his nap, toddled into the living room and we held our breath, expecting him to be mesmerised by the tree, the lights and the decorations. No. Dad had left the step-ladder out after scaling it and the first thing that was exclaimed from small boy’s mouth? “Step-ladder!” To this day, we don’t let him forget his awe for the step-ladder (that year he spent all his time trying to climb said ladder only to have one of us pick him up and bring him down from it).

Got me a step ladder. Not yours. MINE.

The traditions have clearly been etched into my memory and even though they are precious and will stay with me, I’m loving being able to start my own with Husband and eventually our family. Whilst we are still sans enfants we can have the tree and decorations how we want them without worrying about whether the baby will hurt themselves/the cat/us and thankfully, the cat isn’t bothered by the tree. We have a fabulous set of decorations, some that Mum sent me a while back, some that I’ve bought and made last year and some that have been given to us both. This year, Husband convinced me that a set of lights would be a good idea for the window. I’ve never had lights in the window but why the hell not? So, we have lights – another tradition that we have started and will continue well into the future.

Food is also a big deal – mum used to make mincemeat and pastry and then turn it all into pies. Husband makes the pastry and I buy the filling (because frankly, it tastes better than I can make) and we cobble together pies on Christmas eve evening. Neither of us can eat an entire turkey (when there are 6 people, plus a few grandparents, a turkey is a good idea – not so for just the 2 of us) so this year, its Jamie Oliver’s 6 hour slow roast shoulder of lamb. Far less effort and also a cheaper. And there is something rather sexy about tearing off meltingly tender shreds of lamb with your fingers after spending the day doing Christmas presents. Whereas we had lunch growing up, because small children (and big ones) get hangry (hungry/angry) if not fed at regular intervals, we can wait til dinner time and have a relaxed grown up dinner.

And not a sprout would be served.

But before all that happens, the one tradition that I’ve started with my mother in law is the annual “take two days off work and shop/eat/drink tea” tradition. It started last year when I needed to do the shopping for presents for Husband without him being there. We had a discussion and MIL needed to do the same for her partner. We joined forces and its been our thing now on an annual basis. We meet, have coffee, meander round Leeds, make inappropriate jokes and giggle til we need a wee and then when all the shopping is over, we come home, drink more tea and natter until its time for one of us to do something or go home. No stress and no trying to buy things surreptitiously while the Husband/partner is in the same shop.

This year, we got married and I changed my surname to our family name. It’s not our first Christmas together, but it is our first Christmas together that we are married. People have asked me if it feels different being married, or whether anything has changed. I can honestly say nothing has changed in the fundemental sense: I still wash up, he still does most of the cooking. We share the laundry and the housework and I still annoy him by leaving piles of stuff everywhere and he still comes in covered in mud and god knows what after a commute home on the greenway. So no, in that sense nothing has changed.  I do feel more solid in our relationship though – it was never unstable to start with but marriage has just cemented that feeling. We are a team, a family and a partnership. My family will always be my mum and dad, sister and 2 brothers and nothing can change that. But my new start with my new husband and my new chapter in my family is equally important.

In this Christmas and the Christmases to come, when our family will hopefull grow to include small people, the traditions will carry on being born and talked about. Because families evolve and grow and change. Just because some of the old traditions are not carried on, doesn’t make them any less important. The new traditions are not more important, but they are a pathway to my future. My future with my husband.

Merry Christmas – to families old and new, blended and linear, adopted and biological. Family is what you make it, so make it special.