I am in the dog house. The metaphorical dog house, given than if we had a dog, or a house in which the dog lived, the cat would have bullied the dog into submission and claimed squatters rights in its house. But I am in said house of dog on account of the cat. Or rather on account of what I have subjected the cat to this morning at the rather ungodly hour of 9am. On a Saturday. Even this cat knows that weekends get a slightly later start than week days. This morning required a trip to the vets on account of said cat being scabby and itchy and very licky, more so than normal. As it turns out, she’s allergic to fleas and the scabby back is a result of her licking and biting to relieve the itching caused by the allergy. 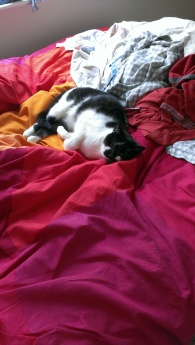 As far as cats go, she’s a fairly normal looking cat. Black and white, 4 legs with the usual tail and whiskers. She came to live with us shortly after we moved in to the flat and after 2 days of saying she couldn’t stay because she technically belonged to someone else, she became the 3rd member of our family. Very quickly she established herself as the centre of attention, demanding laps to sit on and people to cater to her every whim and desire. She also learnt that if she stood at our door and battered it with her paws and claws, coupled with a very human like cry, we would get up and let her in. We were trained very quickly. Her original owner didn’t care that her cat had left home and set up with the new neighbours and so, almost 2 years later, she is officially ours. Cats are not like dogs (no, really?) where they have one master and one only. They are fickle and will attach themselves to the best provider of food, shelter and the occasional scrap of fish or meat from the human plate. This one was no different.

Can you touch your nose with your tongue? No? Loser.

Except she is. To me she is more than a cat. The Boy, who had the initial reservations about keeping her, is her favourite person. She follows him round the flat, sitting in his way when he shaves, fixes his bike, is at his laptop at the desk. She bolts to the door when he comes home and paces the floors when he is away or late. In short, she adores him. With me, she has a very different relationship. I feed her in the morning and evening, I deal with the poonami and the usual litter tray issues. I take her to vets and dish out the pills and liquids when she needs them (see first paragraph) and I’m the one she takes up residence on in the evenings when we watch movies with dinner. I indulge her demands for baked bean juice and cheese and occasionally break all the rules and she gets the remains of the milk from breakfast.  In return, I get bitten and scratched when she’s pissed off and the occasional head bump when she feels in a loving mood.

something on my face you say?

I’m aware that I could be accused of treating her like a small child. I do get told by The Boy that she’s a cat not a baby. That I need to stop thinking she is a person (even though I am convinced she isn’t sure she isn’t a person) and treat her like a cat. To a degree I do treat her like a cat. She has cat food in a cat shaped bowl (free with a tonne of Whiskas…that is a whole other story) and she gets cat biscuits and other cat related stuff. But even though that is all well and good, I cannot help but treat her as more than ‘just a cat’. She is my furry mate, a presence in our house that brings joy and laughter. Her antics when she destroys the catnip laced mouse and bolts around as if she’s possessed make us laugh. She seems to know when I’m unwell or in mental slump and will plant herself on or near me.

So while she is sulking and grumpy, dashing around the house slobbering and being unhappy, I have to remind myself that it’s because I love her that I am making her grumpy. I hate seeing her in discomfort or pain. I hate hearing her wailing at me from inside the carrier and panting because of the stress of the car trip to the vet. I hate that she has to be in a room with dogs when she hates them and would ordinarily be able to defend herself (even though most dogs are terrified of her). I hate having to hold her still while the vet pokes her with needles and feels her tummy. Each sweaty, stressed paw print makes me want to hold her and tell her how sorry I am for causing her distress and fear. But I can’t make her understand because, despite all my belief to the contrary, she is a cat. She doesn’t understand why I have to put horrible liquid on her back that makes her slobber. She doesn’t understand why I have to crush pills into her food or try to make her wear a cone of shame. She certainly doesn’t understand why I’m not letting her outside to sun bathe or scratch her claws on the wooden chairs that she loves. I do all this because I love her and I want her to stay with us as long as possible.

For now, she is sulking in another room. I’m not allowed to come near her or stroke her. I’m not allowed to scratch her in the soft spot behind her ears that usually she adores. I’ll admit it feels a bit like she’s being a meanie and having a sulk. But I remind myself she’s a cat. Not a human. Until she decides I’m not the enemy who will make her more uncomfortable, I just have to wait out my punishment. I am a crazy cat lady and I’m not ashamed to admit it.